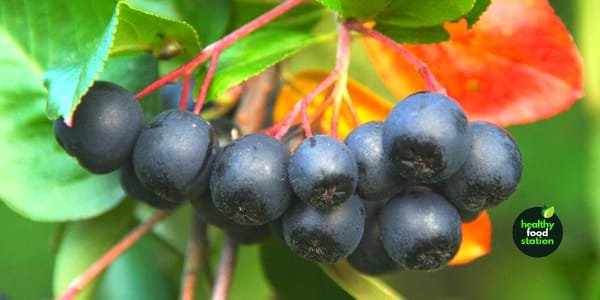 Aronia berries contain a high level of antioxidants, ployphenois, and anthocyanins which could be used for dealing with inflammation, flu and even could reduce cancer risk

ORAC is –  oxygen radical absorbance capacity—as you might guess, it’s a way to measure the number of free radicals that can be absorbed or neutralized by any given food.

Aronia berries have 16,000. To explain better, blueberries have long been seen as an excellent antioxidant, and their ORAC score is 4,669. Elderberries have a score of 14,697, while cranberries have 9,000.

Though ORAC scores depend on the source you refer to and whether or not the food in question has been processed, it is safe to say that Aronia lands on the top.

Their high ORAC scores come from a potent blend of polyphenolic antioxidants including tannins (a subclass of flavonoids present in red wine), catechins, and anthocyanins. The compounds in Aronia have strong antioxidant, radical-scavenging properties. Aronia is unique because of its presence of huge amounts of anthocyanins, tannins, and proanthocyanidins

What it can help for

It will help with any condition exacerbated by oxidation and inflammation—and that’s a pretty broad range. A recent abstract in the International Journal of Inflammation says, “Inflammation triggered by oxidative stress is the cause of much, perhaps even most, chronic human disease. In such instances, the source of the inflammation is also often imperceptible. This is relevant to the many pervasive chronic diseases that are still responsible for so many human pains.

Bulgarian researchers have a list of specific maladies that Aronia shows efficacy in treating. The list includes an ability to protect the liver and digestive system; fight bacteria and type influenza; normalize carbohydrate metabolism in diabetics; fight cancerous mutations, and decrease toxicity and accumulation of heavy metals. This is why everyone calls it a superfood.

Aronia berries come in a variety of forms. Superberries makes an organic, non-GMO Aronia berry concentrate. They can make one bottle from over seven pounds of the fruit. Sailors always use one tablespoon of concentrate with water and maybe a splash of lemon juice.

A lot of gummy chews are with its taste, which would be quite a healthy upgrade over the vast majority of kids chews currently on the market. Fresh-frozen berries in their natural form are also in the markets. You can use them in smoothies, in cereal, in salads, or on yogurt.

Americans universally can benefit from eating foods with higher ORAC scores—it fights one of the great unseen killers in this country.